Skip to content
Artist-in-residence at the Collège Sainte Thérèse, Saint-Pierre-en-Auge, France.
Production Frac Normandie Caen.
From January to May 2017. 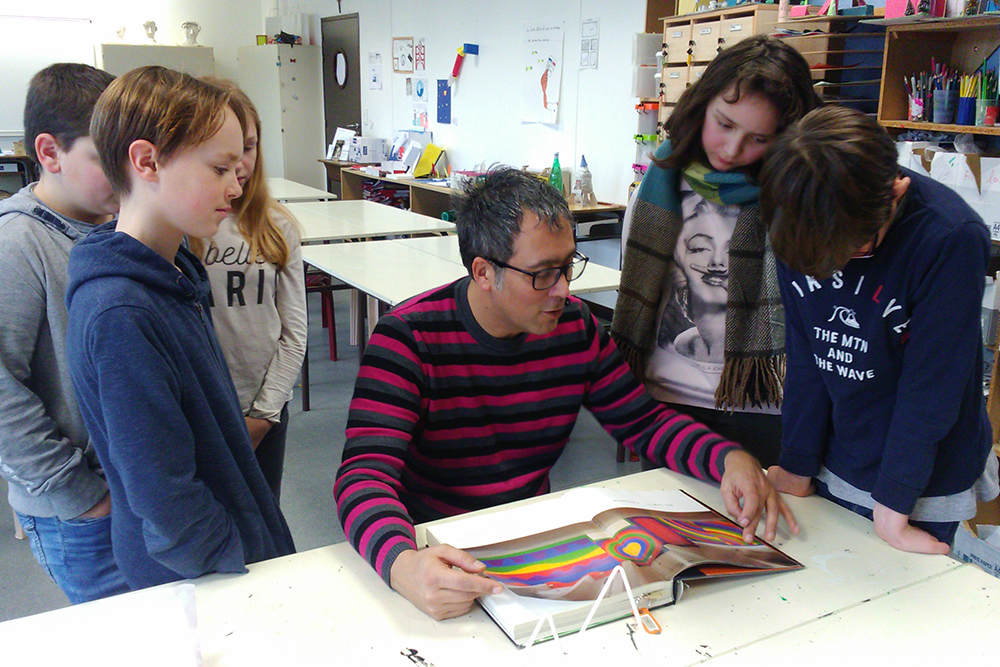 In 2017, I was welcomed as an artist-in-residence at the Sainte-Thérèse school in Saint-Pierre-en-Auge. This type of artist residency sets out in the hope that an encounter with an artist and his work might play a role in the artistic discovery and development of young people. On the menu: a series of sculptures made from golf balls and a rather unusual glass cupboard. Alongside these productions, a group of older pupils were given the task of checking out all the cupboards and storage spaces situated within the establishment. After consulting the guidelines for art conservation, a selection of works from the Frac Normandie collection was made and an exhibition hung and presented during the final week of my residency.

The making of sculptures from golf balls.

When I arrived in Normandy to begin my residency, I discovered that the Frac, regional collection of contemporary art, was preparing for a relocation. A new building was already under way. The architect chosen for the project was Rudy Ricciotti. I had already seen his name somewhere else, so I started searching through my notes. Through his philanthropic spirit, Ricciotti is as active in the field of art as he is in architecture. Effectively, he has provided sponsorship for a wide range of experimental, even radical art projects. Notably he helped Gilles Mahé to make some of his most ambitious works. 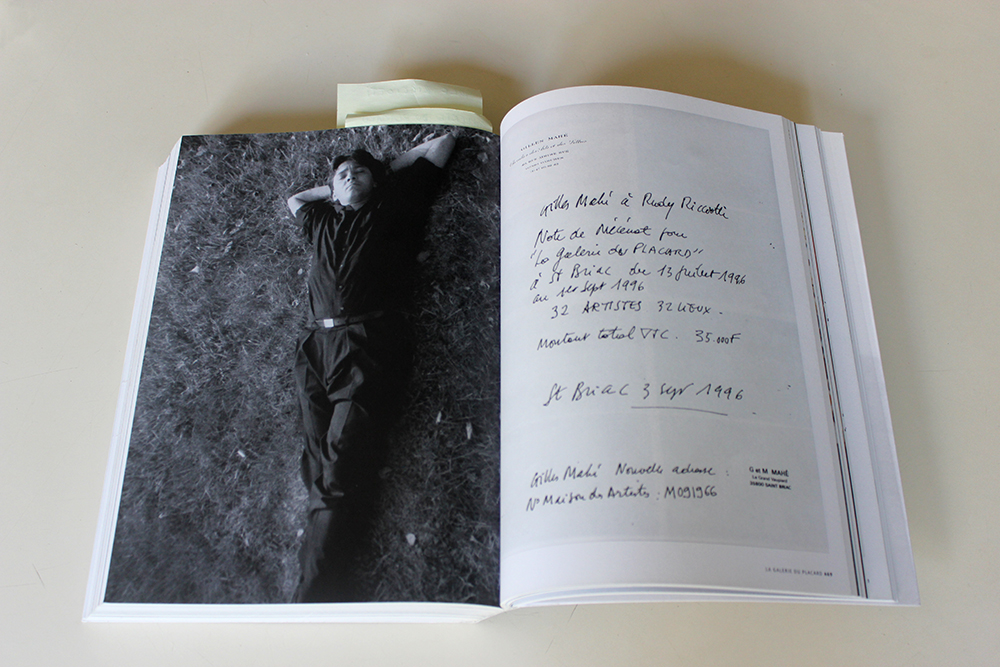 As an artist I feel quite close to Gilles Mahé. No doubt I was attracted to the way in which he built a social practice from a conceptual base. With one eye cast on the history of art, I see Gilles half way between myself and Robert Filliou. Over the last few years I have become more and more interested in the plastic quality of architecture as well as its capacity to reveal, even to create social networks. This fascination led me towards a collaborative process, not only with other artists, designers and musicians, but also with the public, in a very broad sense.

In 1993, when Ricciotti announced that he was ready to buy a work from Mahé, the latter replied with a rather conceptual proposition. Ricciotti should settle the annual bill for Mahé and his wife at the Dinard Golf Club. Mahé committed himself to playing golf while thinking of Ricciotti. And so a certain correspondence «mail-art» developed. Then in 1996, Mahé had the idea for the project «La Galerie du Placard» (the cupboard gallery). Mahé wanted to set up contacts between an impressive number of contemporary artists and local shopkeepers in his home town of Saint-Briac. Obviously it was for the artists to invest this unusual space. Ricciotti once again sponsored the event.

For my residency here at Saint-Pierre-en-Auge, I wanted to celebrate the relation between these two men. We managed to get hold of a few thousand golf balls, and with a motivated group of 12 yr olds, we experimented the possible ramifications of form starting from a simple sphere. It wasn’t easy. We failed time and time again. There is a point when the sculpture becomes too heavy for the glue and everything falls apart. The forms that we retained resemble molecules. No doubt any good chemistry teacher could identify them.

I also started to have a closer look at the architecture of Rudy Ricciotti. I was very attracted to «Le Pavillon Noir» a dance school that he constructed in Aix-en-Provence. Strongly inspired by this building, I began to design a glass cupboard as a future home for our golf ball sculptures. 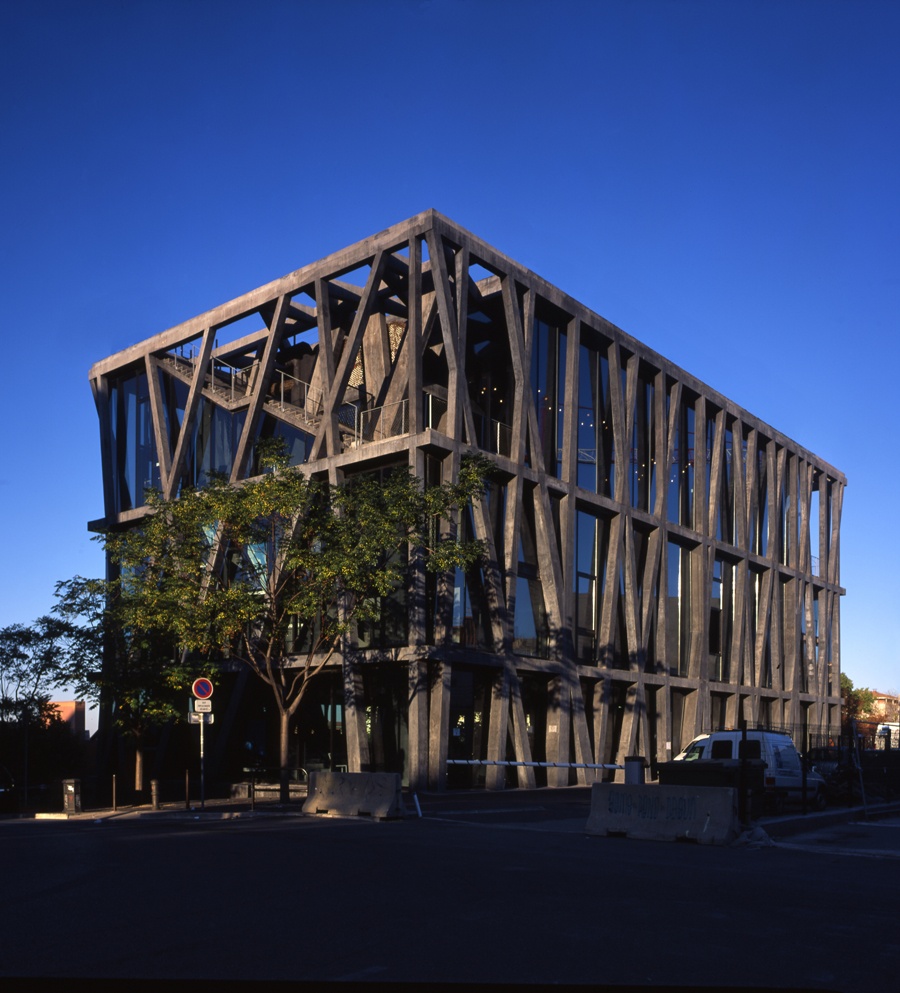 As for the fabrication of this object, I was lucky to meet Romain Castagne and Julien Declerck. Julien is an ex-pupil of the Collège Sainte Thérèse. Together, they established a metal workshop, just outside the town. Rudy Ricciotti is above all known for his buildings in concrete, a material that he appreciates for its «revolutionary» qualities. He resists wherever possible the temptation to work in metal. However, Rudy is also a militant for the transmission of know-how and skills from one generation to another. The current pupils were so happy to meet Julien, the ex-pupil, whose practice today lies at the junction between art, mathematics and engineering.

Visit to the Metal RJ workshop.

I decided to galvanise the steel used to make the glass cupboard. This was not for aesthetic reasons. Simply, I wanted my vitrine to resonate with the agricultural objects that I often see as I travel through the local pastures.

Installation of the art work and the restitution of my residency.

In parallel to making this new work, I wanted to evoke Gilles Mahé’s mythic project, «La Galerie du Placard».Working with a small group of 15 yr olds, we asked the Frac Normandie Caen if we could borrow some work and hang a show in various cupboards throughout the school. After having identified the storage spaces most suitable for such an exhibition, we went to visit the Frac and chose half a dozen artworks that seemed pertinent in relation to the project.

Visit to the Frac Normandie Caen.

Simon Le Ruez is interested in how everyday objects can become monuments. In his work, «A familiar place for the very first time», an ironing board come bunker, covered in artificiel lawn, offers us a strange landscape mixing domestic activity with the violence of wartime architecture. It is the state of abandon that confers upon the military bunker, the status of «monument». Its inactivity, its inutility and its decrepitude validate the bunker’s role as a witness of past events.

The art of François Morellet is based upon controllable elements, juxtaposition, superposition and fragmentation are associated with interference and arbitary mathematics. In the work, «Random repartition of 40,000 squares», it is the telephone directory of the french region «Maine et Loire» that is at the origin of the composition. Respecting the rules of binary logic and following the alphabetical organisation of the directory, the squares are accorded colours depending upon the quality «odd or even» of the given telephone number. There is nothing else to see other than that which has been done.

In the work «Balcony», Philippe Ramette has himself photographed on a balcony, contemplating the distant sky : «One can see the artist considering the landscape from the height of a wooden balcony … an observatory, the discomfort of which one can estimate quite quickly, as the artist is in reality lying in a horizontal position above a hole that has been dug in the lawn.» [C.Francblin] Playing with perspective, the artist tempts us to see a balcony as a plinth.

Gilles Mahé’s attention is turned towards the circulation of images and exchanges between different people, to works made by other artists, to the collective aspect of many of his projects, and to the conjugation between public and private, between society art and economy. «Villéglé sur Buren (Hommage à Bertrand Lavier)» concentrates two logics of exchange and appropriation : the reference to the artists Jacques Villéglé, Daniel Buren, Bertrand Lavier, and on the other hand to the participation of the public. The gesture (laceration), the form (the alternate stripes) and the structural principal (the superposition, the covering over) are activated anonymously by the public from the very beginning of the work in 1998 when the public fabricated the work by themselves.

Chewing gum is one of the founding materials in Dominique Figarella’s painting. As a material, with its seductive colour and pliability, it seems to slip perfectly into painting’s palette. At the same time it seems dirty, improper, foreign. Figarella uses it as a clue which might allow at the spectator to launch an enquiry. «I want it to speak to everybody» [D. Figarella] Take a chewing gum. Not any old chewing gum. A Malabar. Childhood and its memories …

The exhibition «Placard-Placard» guided tours by the pupils, for the pupils

And as a way to invite the widest possible «grand public» to the restitution of my residency, the pupils meticulously made some posters. 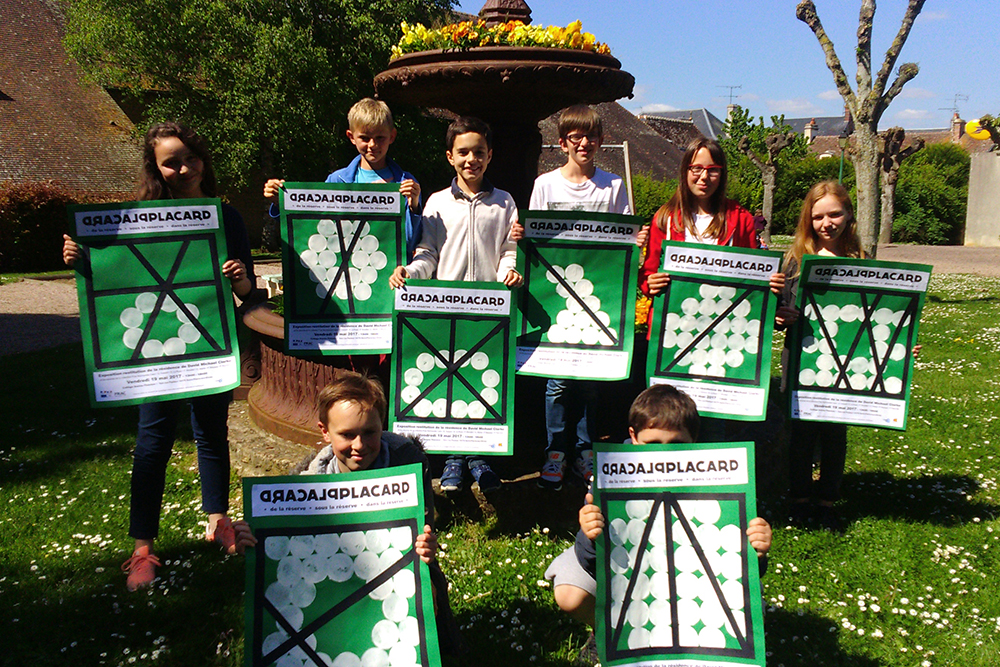